Tips & Advice: What are the scams on iHookup? Read our review

Review by:
The Expert on iHookup

We show you all the scams we found on iHookup. You will be wasting your time and money. Read more in our negative review of this scam website.

You would think that hooking up was quite sexy. The allure of the illicit fling, the mystery of an unknown lover, the thrill of the clandestine. So how a site managed to make it so monumentally boring as iHookup did we will never know. Unfortunately this terminal dullness also spread to the girls on the site, rendering them some of the most boring people we have ever had the displeasure to know.

But let’s start with the glaring problems on the site. If you are going to put up fake profiles to pad out your site and pull gullible guys in, then at least try and make them unique. This was the one site in the test where we saw double profiles – the same profile, featuring the same pictures, with one or two details slightly changed. Why do they think they can get away with it? You are obviously going to notice and it immediately puts you on the back foot about whether any of the other girls on the site are real or not. 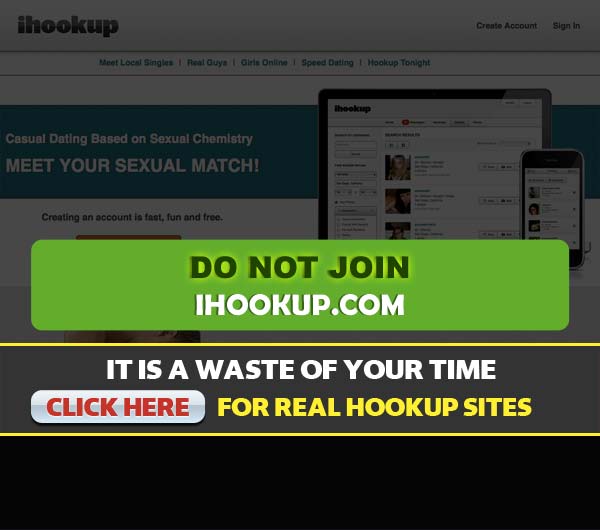 Dim, Dumb And Not Full Of…

In some ways we wish all the girls on this site had been fakes, it would have meant we wouldn’t had to meet any of them. They initially seemed nice enough. Again the girls were not top quality – definitely middle of the pack, plain girls. Some people may like this but not us. But no matter, we soldiered on, and wading through the Somme would have been easier than wading through this dross. We put up the same profiles as on other sites, and had worked a charm on those sites, but here only tumbleweed. The girls weren’t interested, or interesting. We of course took the front foot and emailed any girl who looked announce of fun, but even there we had little luck. What girls did reply came back with boring chat, not interested in chatting or flirting.

Eventually, after what seemed like an age, we managed to finagle a few dates. Of the six dates we set up in our local areas, three showed. Out of these three, two we blew off ourselves as just not being worth it – the pictures they had posted had been terribly kind and the thought of a night in bed with them sent shivers down our collective spine. One of us got lucky, from all the girls on the site. One. And she was nothing to write home about.

If you are looking for fun in the Canadian hookup world then… look further. Look a lot further. This site was DULL with a capital tedium. The girls, the ones that were real had nothing whatsoever going for them and it was a chore to get anything of interest out of the site. At least when you are dealing with scammers you can see it as a battle of wits, but the girls here were just witless. If you like you girls plain and thick then check them out, but really you have got a fight on your hands getting laid on this site.