Tips & Advice: Are there scams on JustHookup? Read our review

Review by:
The Expert on JustHookup

There is just way too many scams on JustHookup. You will waste your money using this site! We do not recommend this website.

On all of the crazy, bullshit, scam sites we tried there was one thing we never could get our head around. Why, if you were there explicitly to meet a girl in your town to hook up with for the evening, would you bother spending your time on the sites jerking off to some cam girl half a world away? Surely you can do that on almost all other sites on the internet. Sure, that’s how some people get there rocks off, but you are here for actual sex, not sex with Mrs Palm and her five lovely daughters…

This site in particular seemed to promote its sex cams more than actual hooking up, which seems crazy for a site with hookup in the name. The girls on the cams aren’t local, and you are never going to meet them. There are there solely to try and wring extra money out of you and almost prevent you getting laid. This is a good enough reason to avoid the site altogether. You don’t want to get waylaid watching porn all night. You want the actual thing. That is why you are there. You have to treat it seriously if you are going to get seriously laid. You have to put in the effort to craft that great profile, send out those great messages, and close that great deal. You can’t do all that typing one-handed. 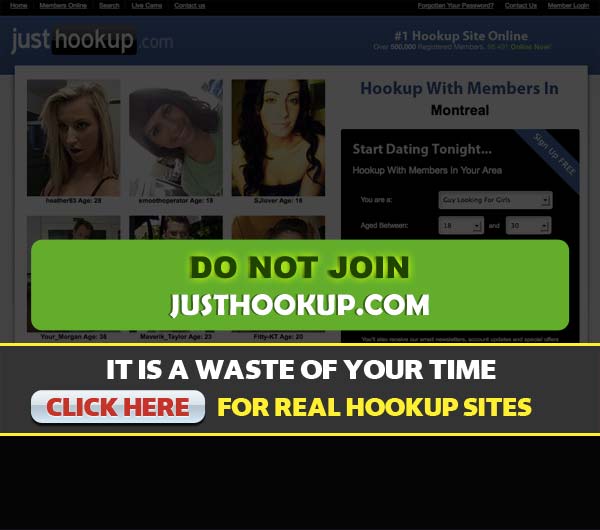 By this point it was kind of getting us down. Were there any real girls in Canada? Or is the entire female population fake, dreamed up purely to part the males from their cash (a few people nodding at the back…). This was another site which promised much but delivered little. There were a few morsels of decency between the frauds but not enough to sustain our interest in the site. We found once again pictures taken from elsewhere on the web of hot women pretending you could meet them in your town tonight. But really all they are doing to serving as page filler for…

This was another site which was crammed with ads offering you other sites (why would you move on when this one was so good!) or NSFW things to do with enhancing you size or staying power. We weren’t interested.